Glenda Armand was born in New Orleans and grew up in Los Angeles where she attended public schools.

She received degrees from Pomona College, Cal State University, and Azusa Pacific University. She has been a school librarian and taught grades pre-kindergarten through eight in private and public schools. As a child, Glenda loved to read and write. She wrote poems and stories about talking butterflies and elephants that hated the circus. She wrote plays on scraps of paper and recruited her younger siblings to act in them.

However, there are three books that helped shape the current focus of Glenda’s writing career: They are a dictionary, a Bible and an autobiography. Glenda fell in love with history when she and her sister, Fay, discovered the Declaration of Independence at the back of their family’s copy of the Random House Dictionary of the English Language. Glenda and Fay made a game of reading the Declaration aloud and seeing how far they could get before stumbling over a word. Getting past “unalienable” was a major accomplishment. In spite of its multi-syllabic words, Glenda learned the story of the Declaration and of the nation that it created. 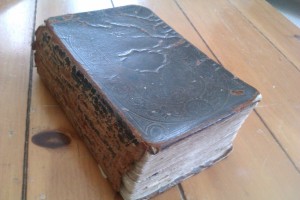 As a recent college grad, Glenda visited her grandparents in Louisiana. While at their home, Glenda came across a Bible that had been printed in 1869. It had belonged to her great-great grandfather, Victor Jones, Sr., who was born a slave. In one moment, one of the most tragic aspects of American history ceased being a chapter in a history book and became real, tangible, and personal. Victor Jones, Sr. died a free man in 1928.

Later the Bible was given to Glenda and remains her most treasured possession. Those three books: Her family’s dictionary, her great-great grandfather’s Bible, and the autobiography of Frederick Douglass gave a focus and a meaning to Glenda’s passion for history, reading and writing. She writes about people who struggled for freedom and dignity in the face of overwhelming circumstances.

American history is replete with such people. Their voices are worthy of being heard. We honor them by learning their stories and telling them to our children. 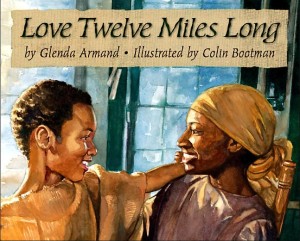 After many years of teaching in the primary grades, Glenda decided to teach eighth grade. In preparing to teach US history, Glenda read The Narrative of the Life of Frederick Douglass, an American Slave. In those pages, Glenda met Harriet Bailey, the mother of Frederick Douglass. As the mother of two, Glenda related to Harriet’s heartbreaking dilemma and could not get it out of her mind. Glenda felt Harriet’s guiding hand as she wrote Love Twelve Miles Long.

The story of Ira Aldridge, an African American born during the time of slavery, who dreams of becoming a Shakespearean actor. In this book, Glenda combines her love for Shakespeare with her passion for writing about those who overcome overwhelming odds to do great things.